The ramp terrains feature commonly in the mini arena. A standard competition arena will have 4 sets of 32 ramps, arranged in either a continuous or a crossing configuration. 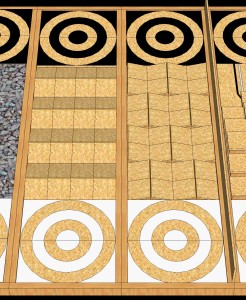 The ramps may be built in a variety of ways so long as the upper surface is OSB or OSB-like plywood, the footprint is 145 x 145 mm and the surface is sloped at 15 degrees. The reference arena was built with ramps as follows.

These components can be secured with wood glue and nails. In the absence of a nailgun, wood screws may be used, in which case construction may be easier if the OSB triangles may be replaced by pieces of lumber 15 to 20 mm in thickness.