Report from RoboCup 2016 in Leipzig

We established the RoboCupRescue Rapidly Manufactured Robot League (RMRL) with the aim of bringing research level challenges to high school students. From the 30th of June to the 3rd of July, we ran a demo round of this competition at the RoboCup World Championships in Leipzig, Germany. 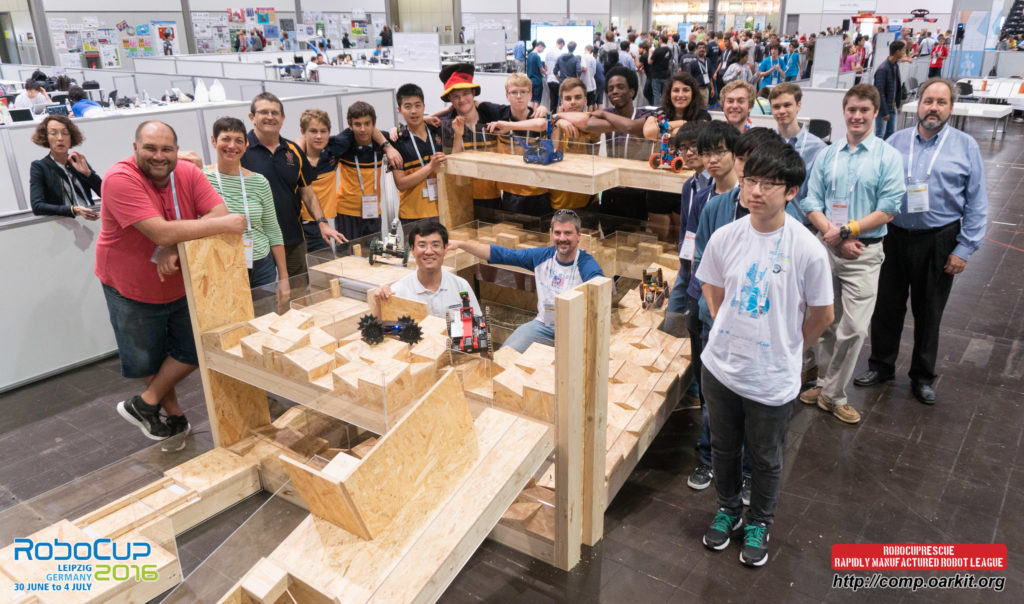 Five teams from Australia, Japan and the United States came and competed and brought with them 9 robots. Several of these were based on our Open Academic Robot Kit (OARKit) Emu Mini 2 robot, with modifications that resulted in a wide range of different capabilities. Others were based on alternative platforms, 3D printed or otherwise.

The five teams were: 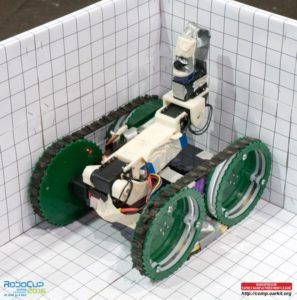 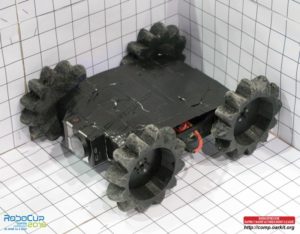 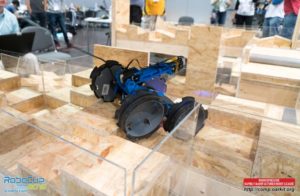 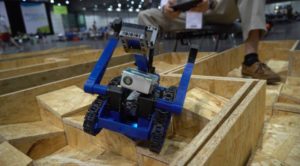 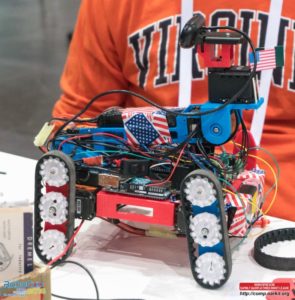 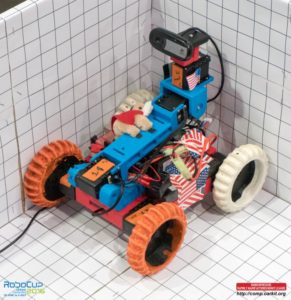 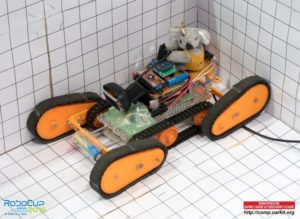 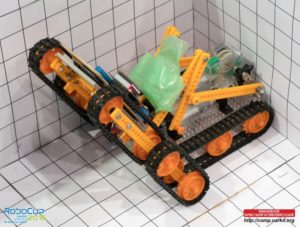 – The video subsystem from Christchurch Grammar School, which was able to maintain a drivable video feed over the radio link, even when pretty much everyone else had to resort to cables.

– The wheels and general layout from St. Francis Xavier College, which was able to fit everything into the body of the robot in such a way as to survive multiple drops and run inverted.

– The alternative robot design from St. Elizabeth’s with the two hooked arms and movable tail. I’d particularly love to see some more videos of this robot getting over various terrain!

– The tracked wheel/leg extensions from Blue Storm Rescue, which showed great promise as a novel way of reconfiguring the robot’s geometry.

This competition was run according to the rules of the RoboCupRescue (Major) competition, with minimal changes as necessary to accommodate the smaller arena and to make the competition practical for high school students. These changes included:
– All apparatuses constructed at the 30 cm (12 in) scale, rather than the 120 cm (4 ft) scale of the Major RoboCupRescue competition.
– Preliminary runs of 5 minutes rather than 15, due to the significantly shorter distance to travel.
– Autonomy and sensor tests currently ignored to simplify logistics (as the robots participating in this competition only have standard cameras).
– Due to the small number of teams, all 5 teams progressed to the finals.
– Arena reconfigured into a maze for the finals, due to the ease with which the test method pallets at this scale may be reconfigured.
– The finals consisted of 10 minute runs with teams allowed to start anywhere in the arena. Traversing a terrain palette earned teams one point for each direction, up to a maximum of two per palette.

The preliminary runs, conducted on the 1st and 2nd of July, saw teams attempt 28 runs across the various terrains. 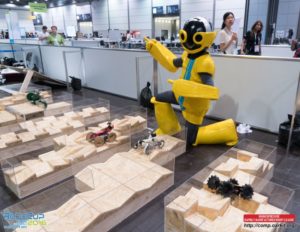 The scores are shown below. 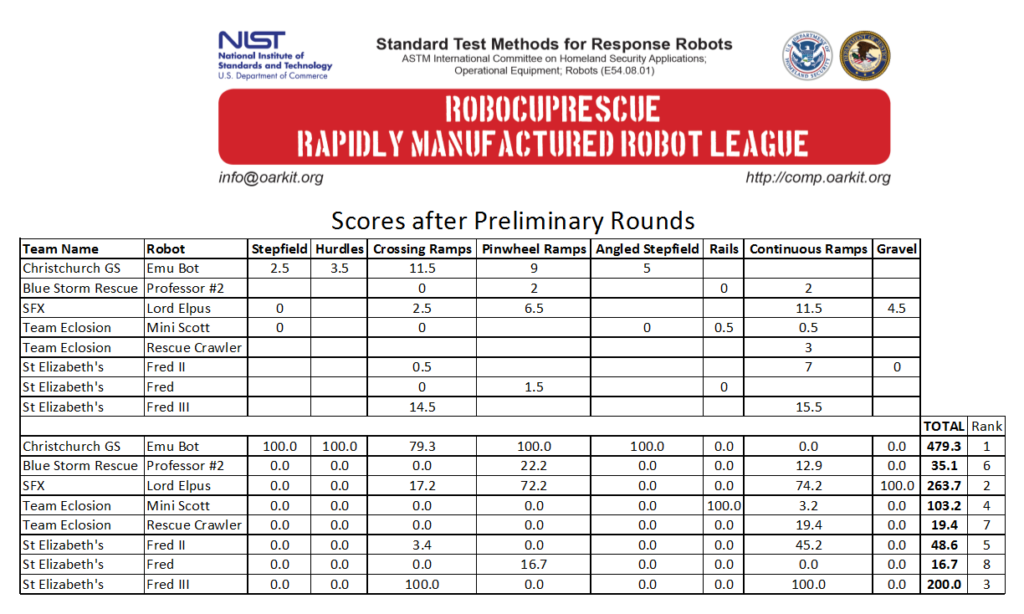 Scores were combined using the same formula as in the Major competition: For each terrain, 100 points were awarded for the best performing robot. Other robots were allocated points proportionally to how their scores compared to the best performing robot. The aim is to encourage teams to attempt as many of the terrains as possible and to develop innovative solutions to the more challenging terrains.

The final runs, held on the 3rd of July, saw four of the five teams attempt three 10 minute runs each in the combined maze. (The team from St. Elizabeth’s was unable to stay for the finals so they performed three informal runs on the previous day.) 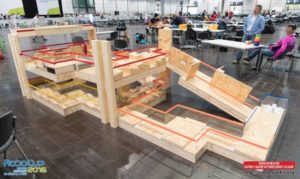 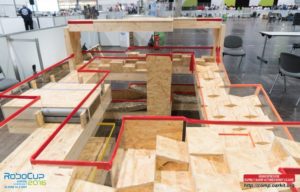 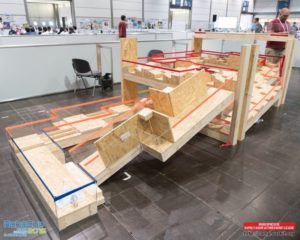 Teams varied their strategies across the runs, watching each other and improving their technique. A minor adjustment was made to the way in which the parallel rails were set. The outer edge of the rails were lined up with the outer edge of the robot, rather than the centre, doubling the allowable tolerance for teams to line up their robots. The best score out of the three runs was chosen as the final score. These were:

In September, we are planning on kicking off a North American round of the Rapidly Manufactured Robot League. This workshop is tentatively scheduled for the 17th and 18th of September. We plan on hosting it near Washington DC and streaming it online for those who can’t make it in person. The goal of this event will be to kick start a bunch of teams with the OARKit robot. This round will culminate in a competition in early December. There are also plans to have demonstration of this competition associated with regional opens such as the Australian Open in September. We will make further announcements as details solidify. Please join the mailing list at http://list.oarkit.org to keep informed of further details.

Report from RoboCup 2016 in Leipzig